In these notes, I’ll discuss the PET-UNK-abc197b8-1 design (a dihydrouracil) as a means to merge 3-aminopyridine-like and quinolone series. Some supporting information for the design is provided as discussion for the original submission. The design should be considered as being derived from the VLA-UCB-50c39ae8-3 design which had been submitted previously. When submitting the PET-UNK-abc197b8-1 design, I was actually unaware that it (and VLA-UCB-50c39ae8-3) could effectively merge the 3-aminopyridine-like and quinolone series. 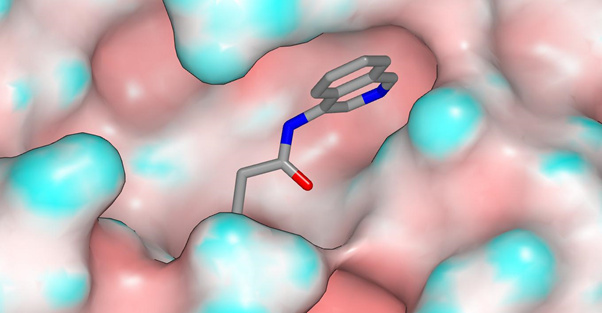 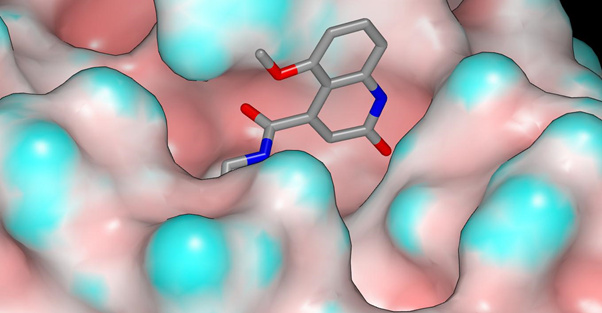 A potential binding mode for PET-UNK-abc197b8-1 was generated using Hybrid from OpenEye and the X10959 crystal structure. This is shown below with the crystallographic ligands ADA-UCB-6c2cb422-1 (green) and EDJ-MED-6af13d92-3 (blue). The molecular surface is for the X11294 crystal structure and has been colored by curvature. The structures in this overlay can be downloaded in pdb format Mpro-x11294_0A_with_ligands.pdb (247.2 KB).

The amidic NH in the dihydrouracil could serve as a vector for structural elaboration. Replacing this NH with CH2 would be expected to weaken the carbonyl oxygen atoms as hydrogen bond acceptors. 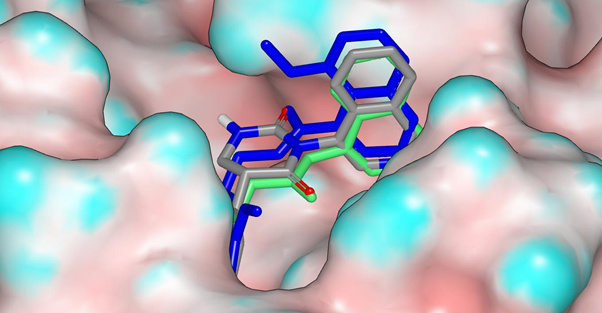 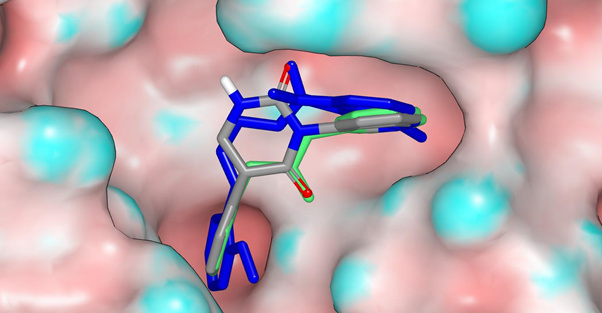 Thanks Peter, this is really a wonderfully detailed writeup – and a clever design avenue. The drastic differences in the linkers has been somewhat frustrating to me since “merges” have not been straightforward, but this looks promising. Let me look into how hard these would be synthetically and see if we can get there without too much pain. We have the “vanilla” 6 membered ring lactam coming through synthesis, so we will see how that goes rather soon.

Good to know that the design is of interest, Matt, and thanks for the update on the lactam. The isoquinoline is flanked by two carbonyl groups and this will force the two rings out of coplanarity. I’m guessing that this might be a situation in which the potency advantage of isoquinoline over pyridine at P1 would be less marked.