TL;DR - Query molecules are powerful and now in Manifold.

Example: encode the many substructure searches for substituted benzene and pyridyl rings 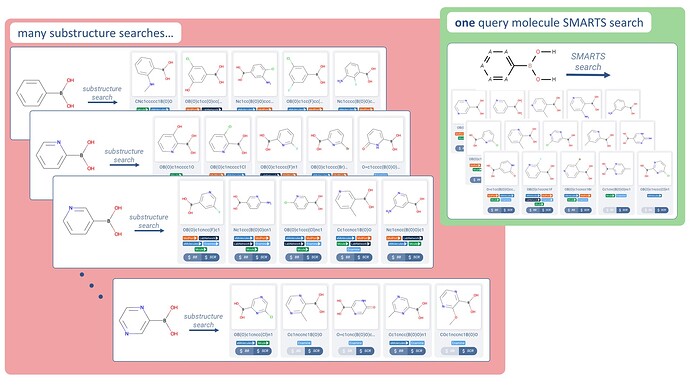 tldr_figure_1_cropped1920×1080 153 KB
→ Gives you all heteroatom permutations of this aryl boronic acid.

Example: get all molecules with a chlorine, bromine, or iodine at a given position

Query Groups - Use predefined generic groups to include in hits

Example: show me a variety of intermediates already coupled to a second ring 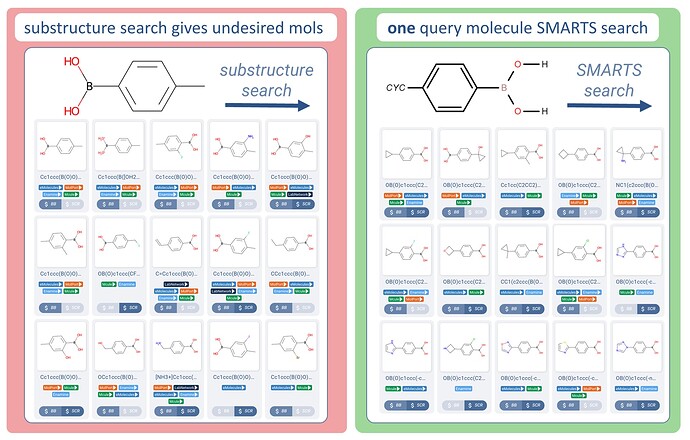 When designing new synthetically accessible candidates, a chemist might first look to their inventory or the inventory of building block suppliers to explore the chemical space around one of the building blocks used in a robust synthesis strategy. Ideally, they would like to hold parts of the original building block constant, while varying other groups strategically.

A common example of this would be taking the amine building block shown Figure 1.A, allowing the chlorine to be either chlorine, bromine, or iodine, and finding building blocks which contain that building block as a substructure.

In Manifold, the chemist could load a search query (Figure 1) with the three variations of the original building block, and then explore substructure matches for each in sequence. Some of the results returned for each are illustrated in Figure 2. 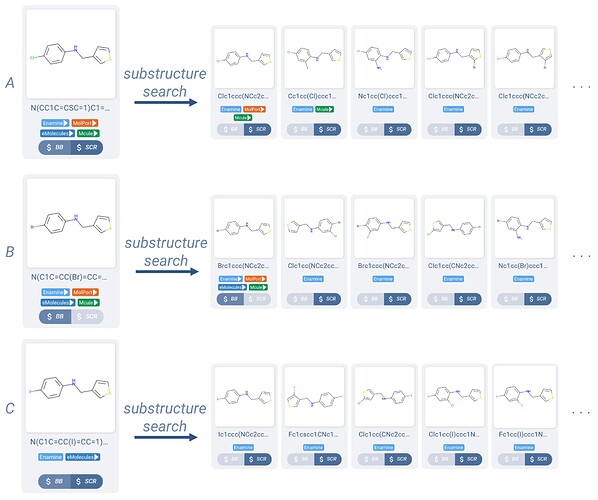 figure_2_cropped1920×1603 139 KB
Figure 2. A sampling of substructure results for each of the three molecules in the search query of Figure 1.

These results are a great start, as there are many hits which could be interesting substitutions to the original amine. However this mode of searching will require that all hits contain the exact substructure, not allowing for substitution of the atoms on the ring, or varied groups at all. The branching off of the substructure is also not controlled, allowing for multiple halide or even primary amine substituents off of the benzene, the latter of which will lead to selectivity issues upon using this building block in amide-coupling chemistry.

As illustrated, there are two glaring limitations to this approach:

Thankfully, SMARTS searching allows us to tailor a single query to get closer to the exact chemically diverse space desired.

Unless you are fluent in the SMARTS language, you are probably unaware of a pretty powerful search mode in Manifold – SMARTS searching. An extremely feature-rich, programmatic method for querying molecules, the SMARTS language by Daylight Information Systems is a household name for a cheminformatician.

Albeit powerful, the SMARTS language is tricky to work with. Through this frustration, many systems for working with SMARTS graphically were born, to enable crafting so-called “query molecules”. Two of the most well-known graphical SMARTS tools are: (1) ChemAxon’s powerful JChem office extensions, and (2) SMARTS.plus from the Universität Hamburg.

We realize that Manifold would not be complete without its own query molecule interface, and as such, is now equipped with an effective graphical SMARTS query feature. This feature builds upon the open-source web-based molecule drawing tool, Ketcher, and enables our users to design query molecules using the following components:

Let’s take the example amine building block from above to illustrate these query molecule features. 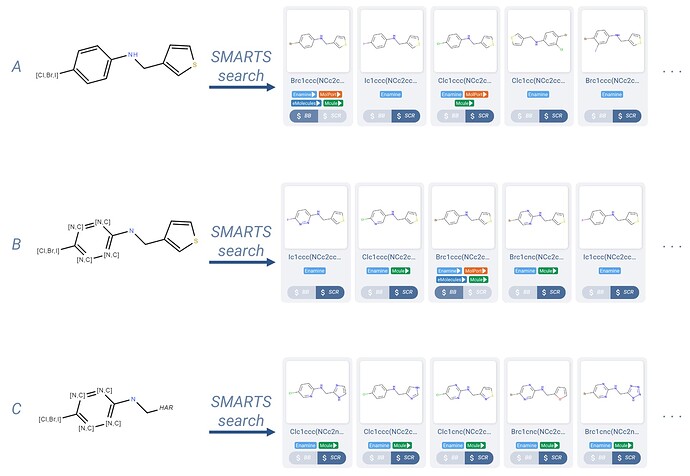 An atom list of [Cl,Br,I] used inplace of a single halogen atom (Figure 3.A) allows us to obtain the same hits that took three substructure searches previously (Figure 2), with a single query molecule SMARTS search.

Another use of atom lists can be seen in Figure 3.B, where we allow the benzene ring to be heteroatomic by allowing the four carbons not participating in a substituent bond to be either nitrogen or carbon ([N,C] atom list).

We can further curate the set of results by allowing the thiophene to be any heteroatomic aryl group. This is done with the use of a generic query group, in this case HAR (heteroaryl). As shown in Figure 3.C, the results are quite diverse, while maintaining required structural and atom features.

Now that I’ve got you hooked on query molecules, let’s take things a step further and deploy this search mode within a real campaign! For example, let’s consider this compound as was proposed to the COVID Moonshot campaign in submission MAT-POS-dd3ad2b5 as an example starting point, and the Manifold-proposed 2-step synthetic route utilized in this series (Figure 4). 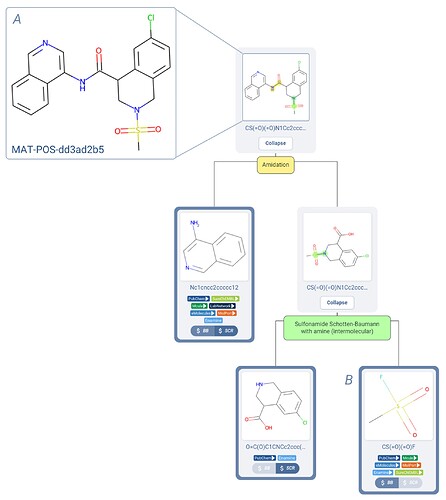 figure_4_cropped1920×2150 114 KB
Figure 4. A COVID Moonshot submission (A) with a robust and synthetically accessible retrosynthesis route from Manifold (B).

If possible, you would really like to stick with this synthetic strategy, as your CRO favors this method, and has plenty of the acid and amine building blocks in-stock. However, based on recent data, the med chem team would like to vary the sulfonyl halide to improve the metabolic stability of the lead while gaining or maintaining potency.

Clicking-through the sulfonyl fluoride building block (Figure 5.A) on the route, you search through the similarity hits that Manifold suggests (Figure 5.C), filtering down to hits which are available off-the-shelf only from Enamine, and applying a boolean filter (to learn more about boolean filtering in Manifold, checkout this blog post) to require the presence of a sulfonyl halide group (Figure 5.B).

figure_5_cropped1920×735 76.3 KB
Figure 5. Sulfonyl chloride similarity search hits (C) for the sulfonyl halide building block (A) of Figure 4B. Results are filtered down to two week lead time, only in Enamine catalogs, and required to contain a sulfonyl halide required structure via boolean filters (B).

Of the many results returned, there are indeed some interesting analogs,which could be used to build out a diverse library. However, to produce a library with more control over the chemical environment of this moiety, the following constraints would like to be satisfied:

An example SMARTS query to explore the generic sulfonyl halide space would be [*]-[CH2]-S(=O)(=O)[Cl,F], which would match the general structure: [<any atom>]-[<methylene carbon>]-[<sulfonyl halide>] (Figure 6.A).

figure_6_cropped1920×650 60.7 KB
Figure 6. Example SMARTS search hits (C) for a query molecule which encodes a desired set of features in the resulting matches. This query (A) encodes the requirement for the presence of a sulfonyl halide group, as did the similarity search in Figure 5, but now without the need for boolean filters. Results are filtered down to two week lead time, only in Enamine catalogs (B).

As a SMARTS master, you would be able to expand out this query to capture the exact building block sets desired. But for those of us who would prefer to craft queries graphically, the new query molecule features in Manifold can help us here yet again.

To focus only on sulfonyl fluoride and sulfonyl chloro building blocks, we can use an atom list to require [F,Cl]. To keep our methylene carbon, we can just use a single carbon bond to add this to the query. All three example query molecules in Figure 7 (A-C) maintain these two query features. We can then use boolean filters to require the presence of an ether OR a nitrile functional group within the hit molecules (Figure 7D).

With these baseline constraints in mind, you would also like to systematically investigate three different sets of building blocks, differentiated as follows, and illustrated in the examples on the top right of the table in Figure 7 (1-3)

To get such specified groupings of building blocks, it is important to constrain for desired functionality, while making sure to exclude others. We can use query molecule generic groups to narrow in on these sets.

The Figure 7.B query very broadly captures ring-containing analogs (with CYC generic group) like Figure 7 (2-3), whereas tweaking the query slightly, allowing only aromatic cyclic moieties (with ARY generic group) off of the methylene carbon, narrows in your results on things like Figure 7.3 only. 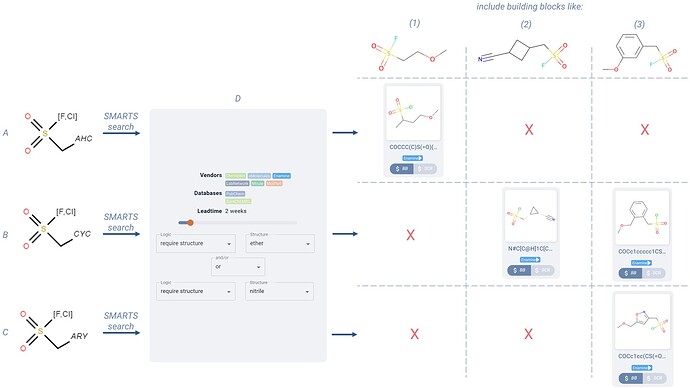 figure_7_cropped1920×1082 66.8 KB
Figure 7. For the three query molecule rows (A, B, C), if the SMARTS results would return building blocks like those displayed on the top of each column (1, 2, 3), then an example hit is displayed. Results are filtered down to two week lead time, only in Enamine catalogs, and boolean filters are used to require either an ether or a nitrile structure (D).

You will notice that none of the three query molecules can successfully yield building blocks of the 2nd category, without also including those in category 3, as a CYC generic group will capture both aromatic and aliphatic rings.

Using a combination of query molecules will allow you to tailor a set of building blocks to build out a library to make improvements to the metabolic stability of the hit, but the specific categories desired need to be acquired via the SMARTS language directly.

Why you should still learn SMARTS

While the results using Manifold graphically will get you nearly there, the control you have by using the SMARTS language directly is unmatched. Two such limitations are: (1) generic groups cannot be chained together, and (2) you cannot embed logical statements for required/excluded generic groups. One example SMARTS which is not possible graphically would be:

Beyond the scope of this post are even more intricacies of the SMARTS language, including

Query molecule searching is currently offered for free on the Manifold platform, so we hope you give it a try!