There is a view (e.g. rule of 5) in drug design that the number of hydrogen bond donors (HBDs) needs to be more stringently restricted than the number of hydrogen bond acceptors (HBAs). My view is that the case against HBDs is not actually particularly convincing although I would not introduce HBD-containing functional groups like hydroxyl, carboxyl or primary/secondary amide into molecular structures gratuitously.

The cost of desolvating individual HBDs and HBAs can be estimated from measured alkane/water logP (logPalk) and calculated molecular surface area for structurally prototypical model compounds. The following graphic gives polarity values for a selection of HBDs and HBAs. Polarity is defined for a compound as the difference between the measured logPalk value and the logPalk calculated for a saturated hydrocarbon with the same molecular surface area. The approach is described in this article and slides 18 - 23 in this presentation may also be helpful. 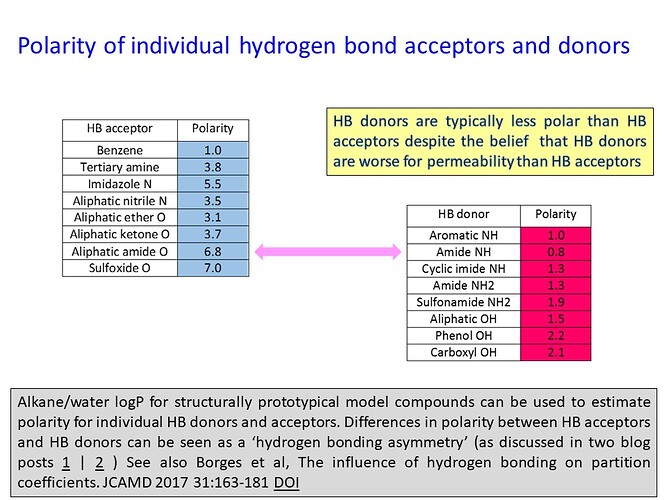 The polarity values in the graphic suggest that HBDs are typically less strongly solvated than HBAs and the imbalance is particularly marked for amides. This implies that desolvation penalty is not generally a plausible explanation for HBDs causing more problems than HBAs. I would consider active efflux would be a more plausible explanation for poor permeability that can be linked to HBDs. That said, I would generally recommend that methyl-capping amide NHs and amide replacement (especially primary and acyclic secondary amides) be considered to address permeability concerns. Structures of protein-ligand complexes can be very useful when addressing potential ADME issues and this comment on the crystal structure of MPro with MAT-POS-4223bc15-23 may be of interest.

Good points. If loss of a HBD is detrimental to activity (e.g. NHSO2R to NMeSO2R), then masking the HBD is another tactic; an EWG ortho to a HBD can also be effective whilst still keeping the NH.