A Checklist for Validating Phenotypic Hits 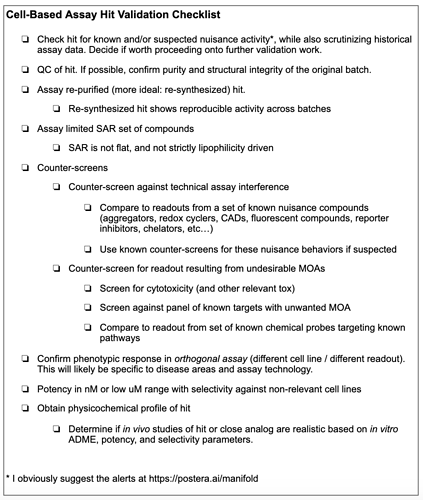 A simplified checklist for helping validate phenotypic hits. If all of these are checked off, your early stage project will be in a better place than most.

Last week’s post explored the new alerts in Manifold for the ever-present “nuisance compounds,” as well as their role in phenotypic screening. After the post, I’ve received some questions about the best assay cascade structure for phenotypic drug discovery. This is a bit of an unanswerable question. The answer highly depends on the original assays used and an in depth knowledge of the disease biology in question.

However, one way to learn about best practices is to read the case studies of phenotypic drug discovery done right. For pointers to those, I highly suggest the following journal articles which I mentioned in the last post.

In particular, the second article by Vincent et al. collects details on the hit triage and validation processes on multiple other publications. The EFMC group also has some case studies of hit validation done right that will be useful. In contrast, the first article, mainly on nuisance compounds, provides a few helpful examples where things don’t work out.

All this is to say that the assays are often quite specific to the project, and counter screens performed may even depend on the identity of the hit and suspected activities.

However, to try to provide something helpful, I have created a “checklist” that features the main necessary features of the phenotypic hit-validation and hit-triage cascade. It is a checklist meant to resemble those used by airplane pilots and surgeons; a whole book, The Checklist Manifesto by Atul Gawande, has even been written about them.

Obviously, fulfillment of this checklist requires resources, and some may proceed at risk due to limited resources. However, if you read accounts of successful phenotypic drug discovery campaigns, I believe that most of these boxes will have been ticked.

I’ll stress that this checklist is not strictly necessary or sufficient for success, it merely tries to capture the main features of good hit validation and triage practices. Furthermore, the steps are not strictly in the order they should be checked. I’ll also stress that planning should start well in advance of running the screen. Design of a good screening library, orthogonal biological readouts, and the initial screening funnel, are steps that often occur before the screen is run.

In the end, designing a good phenotypic assay workflow is hard and never as straightforward as one wants it to be – definitely feel free to reach out with questions!