The MPro inhibitor (compound 19) recently published by Swedish researchers appears to exhibit antiviral potency comparable to MAT-POS-e194df51-1 and may offer advantages over this Moonshot compound. First, 19 lacks a chiral centre which means simpler scale-up/manufacture and no worries about racemization of an ‘unlocked’ chiral centre. Second, amide hydrolysis, which could result in ‘liberation’ of 4-aminoisoquinoline, is much less of a concern because the isoquinolinyl P1 substituent is linked to nitrogen in a ring. I’ll mention @edgriffen | @mc-robinson | @Ben_DNDi | @RGlen | @alphalee | @londonir | @frankvondelft | @JohnChodera | @JSPEN in case these comments are of interest.

There isn’t a crystal structure for 19 and so I’ve edited a chloro onto the crystallographic ligand for 18. The proposed binding mode can be seen in a graphic (molecular surface of protein colored by curvature) below and structures can be downloaded in pdb format: 7qbb_with_str19.pdb (268.5 KB). There appears to be contact between the chloro substituent of 19 and the sulfur of M165 and there could be more to this than a conventional hydrophobic interaction. I’m thinking of something analogous to halogen bonding and would be looking to replace chloro with bromo (standard tactic for strengthening halogen bonds). There appear to be contacts between one of the hydantoin carbonyl oxygens and N142 (side chain NH2; 3.2 Å) and G143 (backbone NH; 3.6 Å). I would be thinking of inserting methylene into the hydantoin ring with a view to pushing the carbonyl oxygen closer to N142 and G143.

Compound 19 does look metabolically vulnerable although good microsomal stability was reported (I don’t have a good feel for what sort of in vivo half-life this is likely to translate to). The chloro substituent on the benzene ring will tend to eclipse the benzylic CH (likely to provide some protection from metabolic attack). The benzene ring could be ‘hardened’ by fluorination and I’d recommend para to chloro although I’d also expect para to cyclobutane to be effective. I’d also be looking at aza-substitution of 19 ortho to cyclobutane (burial of nitrogen is be more poorly tolerated than burial of fluorine) since this sucks electron density out of the ring to a greater extent than fluoro substitution and may also strengthen the interaction between the chlorine and the M165 sulfur. 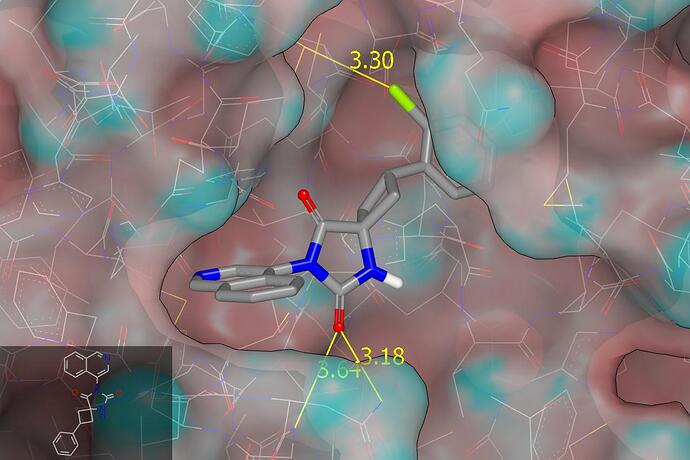 Thanks for the heads up and keen observations, @pwkenny! We’ve seen this work, and are speaking with Jens Carlsson on Wednesday.