Hopefully everything will go according to plan. However, I am concerned that the compounds are not quite potent enough against the enzyme. While the most potent compounds (IC50 ~20 nM) are likely to be sufficiently potent, one can run into difficulties if addressing pharmacokinetics, translation to antiviral activity, etc results in loss of potency. Put another way, if every project compound were 10-fold more potent, the intersection area (sweet spot) in the Venn diagram shown by Ed (I think) in the end of year Webinar would be larger. In case it’s helpful, I’ll mention a couple of design themes and I’m happy to help the design team develop these themes.

If potency against the enzyme does indeed prove to be an issue, it would be worth exploiting the catalytic cysteine. I’ve aligned the A-chains of P0010 and P0019 with PDB:7RFW (Paxlovid) and added an imine to each to mimic the imine of covalently-bound Paxlovid. The graphic below (yellow arrows point at imines) shows the overlays with Paxlovid (in lurid lilac) and there’s also a pdb file that you can download mpro_inhibitor_overlay.pdb (522.0 KB) I have already submitted the nitriles derived from P0010 and P0019 as designs PET-UNK-5ddd54c7-2 and PET-UNK-3e354a91-1 respectively. I see the six-membered lactam as the better option (substituents next to amidic nitrogen in ring tend to orient axially) and suggest starting with z monocycle rather than the spirocycle (covalent bonds have more stringent geometric requirements than non-covalent interactions). In case it’s of interest here’s an article on alkyne-based cathepsin K inhibitors. 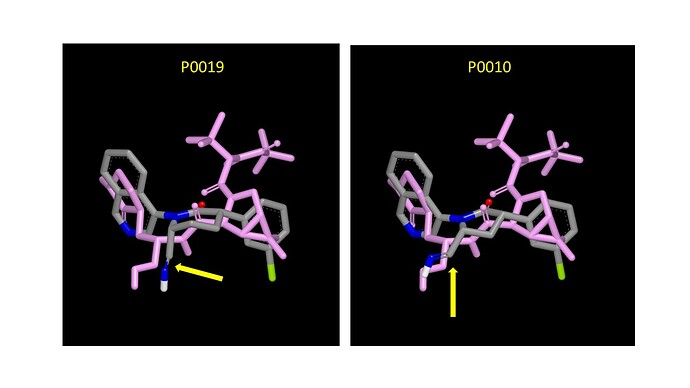 There may be scope for further optimization of the spirocycles. Currently, the favored option appears to be to have the central amide in a five-membered ring although it is not clear (at least to me) why this is the case. I see potential advantages in using a six-membered ring for targeting the oxyanion hole region (e.g. with a second carbonyl in the ring). Assessment of spirocycle variations would appear to be an appropriate application for free energy calculations since synthesis is demanding, the spirocycles are relatively rigid and the perturbations would be structurally conservative.

@londonir : This is your big chance!