At DNDi we have a global network of universities from which we crowdsource chemical synthesis of project molecules - the DNDi Open Synthesis Network (OSN). We have over 25 universities across 5 continents taking part. Basically we have a mixture of UG and and Masters students making compounds for our projects as part of their lab training or as more involved masters theses / final year projects.

Usually these universities collaborate together with DNDi designing and/or making compounds for one or two DNDi drug disocvery projects focused on neglected tropical diseases (mainly lesihmaniasis and Chagas disease). However given the current situation I’m wondering if we could perhaps tap into some of this synthetic manpower to make some of the compounds from the recent design cycles on this SARS-CoV2 MPro project. The OSN is entirely IP free and compounds are made available for testing with no claims over ownership etc.

If there is interest in doing this please let me know and I’ll draw up plans to ask some of the OSN labs to make compounds from the designed lists. A lot of the labs have been closed due to the COVID situation but as the lockdowns ease some of the universities are starting back up and looking for interetsing projects for their students.

Hi @Ben_DNDi, this is a really kind offer. Of course the IP free restriction would be no issue at all with this project. I can definitely imagine a few syntheses that would be great to get going with these labs. Let me check in with the group and see which ones are most amenable. One thing that is really key is that we can get all of the labs to format the compounds correctly, since that is a lot of effort on the Oxford’s teams part.

Hi @mc-robinson,
Sounds good. The evaluation of synthetic feasibility is key, and should in theory also involve the input from the participating synthesis labs since they have additional restrictions - the main one being how much time there is in the lab for the students, and also the level of the students.
Typically for these projects I liaise with the academic labs and we design the synthesis and targets together based on a combination of their synthetic constraints (time / experience) and whatever the project considers to be valuable target compounds. My nbackground is synthetic chemistry so this is pretyt straightforward to achieve.
Perhaps I could look through the recent docking results on the lists of proposed compounds and flag up some which I think would suit this approach, with the obvious caveats that a) they are not already in the synthesis list for Enamine and b) they have interesting docking scores. I could then flag up a list of compounds which I think we could propose to the OSN community.

Regarding testing and formatting, we have never encountered any issues. Generally once the compounds are made a solid sample is sent on the the location for test (in DNDi’s case one of a handful of parasitilogy labs and also maybe an ADME provider). Samples can be sent preweighed so the recipient can just make up the compounds in whatever stock concentration is needed for the assay. Since the number of compounds is low (10’s max) I’d imagine this shouldn’t be an issue. Note we would not plate up and ship as premade plates since this is a) an order of magnitude more expensive to ship since it requires cold chain shipment and b) is usually beyond the capabilities of synthesis labs.

However there is a risk I’m missing something here regarding your formatting comment- most of the labs DNDi traditionally ship to for biological evaluation in our parasitology projects are academic groups but with industry-level infrastructure and SOPs when it comes to screening so plating up compounds from solid is pretty standard for them. I appreciate this may not be the case for this project, in which case we may need to work something else out for the formatting.

Assuming this is all ok for you, how would you suggest we proceed?

I wonder what’s the usual turnaround time for synthesis? Obviously appreciate that students are working on this part-time. Thanks!

Turnaround is generally slow, mainly because the lab time for the students is at a set point in their curriculum so they are not instantly available in the lab. For this reason when we use this resource internally at DNDi we use it to look at back up series or at projects for which there is a relaxed time constraint. At the moment there is additional constraint of COVID lab shutdown but I believe some of those restrictions will be lifted in the coming monthsand we could get students in labs working on things before the summer in some locations.

If we were to turn the OSN it to look at this COVID project I’d suggest taking a similar approach - to look at exploring some of the backup ideas with view to finding additional chemical series rather than to use it to drive whatever becomes the “main” series focus.

I’m happy to coordinate this and to see what we can achieve as long as 1) it doesn’t interfere, duplicate or impede work others are doing on the project, and 2) there is some realistic way to get whatever is made by the students tested and the results shared with the community.

Given this, would you still be interested / ok if we go ahead?

Hi @Ben_DNDi, yes we are still interested. I think the OSN is a great project that Moonshot would love to collaborate with. We envisage the assays to continue running for at least the next few months (@londonir) .

I’m actively preparing a few lists of compounds which I will submit via the usual mechanism but which we would hopefully also commit to synthesizing via some of the DNDi labs, e.g. OSN. I’ve seen the discussion about passing everything via Enamine for formatting and solubility measurement, this sounds like a good idea and should make the logistics a bit simpler.

I’m aware that the Enamine and other resources may already be enagaged on synthesis of next step componuds.What is the best way to make sure there is not any duplication? Is the order list up to date or do you expect to add new orders soon?
Are there any specific areas right now where you think this approach via DNDi could have some impact? Or is it better for me to make the suggestions as to what we could make and you can then check and veto?

One thing I’ve considered following up are the few examples from the recent results which were identified by @mc-robinson from https://pubchem.ncbi.nlm.nih.gov/bioassay/1890 i.e. previous SARS-CoV assays: 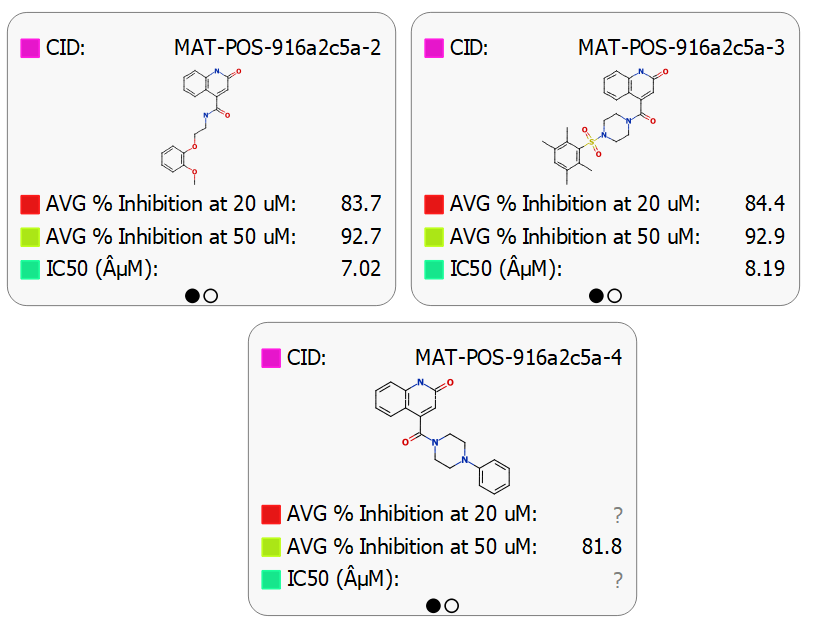 I’m guessing these don’t have any supporting structural data (yet?), but that’s no problem from my side.

Hi @Ben_DNDi I am in the process of triaging a list of compounds for different synthesis efforts taking into account turnaround times etc. Will circle back within the next few days.

Indeed, no structural data for @mc-robinson’s compounds yet.

I just put in a set of new designs which I propose to suggets as targets for OSN chemistry. Once I have more info from you on what’s in the updated synthesis queue I’ll update my list to remove any duplicated targets.

Thanks @Ben_DNDi, and sorry for late reply (was traveling yesterday). I have just seen all of your submissions and they look great. You’ve definitely picked up on many of the similar themes as other new submissions – so let me do the work to look into how we can best optimize using the DNDi synthesis network and doing some synthesis at Enamine/Sai/Wuxi -without any duplication. @alphalee and I will try to optimize for relatively easy, but non-REAL space compounds.

Not an offer to physically make compounds (we are a CADD group), but here is a very large (1+ billion) collection of easily synthesizable compounds: https://cactus.nci.nih.gov/download/savi_download/. Free to use for anyone. See also https://chemrxiv.org/articles/Synthetically_Accessible_Virtual_Inventory_SAVI_/12185559. This is a collaboration with, and based on building blocks from, Enamine. They should be able to synthesize most of these compounds. All proposed syntheses are single-step reactions.

Hi @mn1, thanks for posting! Can you perhaps expand on how this is different than searching Enamine REAL?

Hi @mc-robinson, the overlap between REAL and SAVI is about 143 million structures (see Table 5). Thus, about 90% of SAVI are not in REAL and vice versa. We and Enamine (Yurii Moroz) exchanged our transform sets early on to check how much the chemistries to make SAVI vs. REAL overlapped. The overlap was indeed quite limited, so we decided to keep it like that in order not to replicate each other’s databases. Enamine has already downloaded SAVI so you can request compounds directly that may be hits in your in silico screening. As you can see from the preprint, Yurii Moroz is one of the co-authors of the SAVI paper.

Thanks, @mn1. Appreciate the explanation. And is that overlap of 143 million with the 1.3 Billion REAL or the 13 Billion REAL?

I’ll try to get your space downloaded and searched soon!

Hi @mc-robinson, the overlap between REAL and SAVI of 143 million is with the 1.3 billion REAL Database not the 13 billion REAL Space. REAL Space is not explicitly enumerated anywhere as far as I know (see https://enamine.net/library-synthesis/real-compounds/real-space-navigator), which would be what we need for a straightforward overlap analysis. I still would be surprised if the majority of SAVI were in REAL Space, given the different chemistries underlying either project. To go to trillions or even much beyond that in SAVI is trivial by numbers (just use a subset of the current SAVI products as new building blocks for two-step, three-reactant, reactions), but of course not trivial to implement computationally. We are discussing approaches in my group to create something like SAVI Space, if you will, that would be useful for ourselves and our users.

Thanks, @mn1. Makes sense. I’ll try to get a search of SAVI implemented in the near future.

This isn’t updated on the site yet. But looking through your compounds, the following list are in Enamine REAL, Mcule Ultimate, or Molport. I think we are happy to order many, if not all of these. So I would prioritize the others for synthesis using your network.

I know this submission JAG-UCB-cedd89ab also contains SureChEMBL compounds and thus has routes validated in patents, which may be good for your network if they need more?

Thanks again for all of your help!