I just wanted to make a quick post detailing the design rationale for a series of structures that I will submit after this post. This is some work I’ve been doing since the UK lock down forced uni to shut. I am due to start my computational PhD in September so have treated this as a learning opportunity. I’ve been lurking on the forum for a while and can say it’s been very helpful in guiding my work!

I started by following a blog post by Pat Walters that builds upon a newly published method, CReM, which uses RDKit to suggest modifications to a given fragment by consulting a database of molecules and comparing them to the input molecule. This allowed me to generate a large amount of expanded compounds based on my chosen fragment, x0434.

I firstly identified positions on the fragment I wanted to expand and this was done mostly by eye and by overlapping the diamond fragments and seeing where on x0434 could I expanded to fill the pockets occupied by other fragments. For example, x0107 has a methyl group opposite the pyridine nitrogen and is also a reoccurring motif on this forum. Just as a 2nd example, x1249 has a nitrile group on the phenyl ring, meta to the urea, sticking into a pocket.

One input parameter into CReM is the maximum number of heavy atoms a modification can have. I set this at 8, which is somewhat arbitrary but it keeps the MW and heavy atom count down while allowing for the potential of 6 member rings with a couple of constituents.

As a result of these modifications a total of 7034 structures were generated.
all_expanded_smi.smi (433.0 KB)

As a first pass of eliminating some of these compounds, I again took inspiration from Pat Walters. In a follow up post to the structure generation, he takes the compounds and then generates multiple conformations for each compound within the binding site by mapping the compound to the core fragment. These conformers are then filtered based on two criteria:

This resulted in 2923 conformers from 1056 unique parent compounds (from the original 7034), implying that maybe my 8 heavy atoms was a bit excessive. The 3D coordinates of each conformer in the binding site are returned.

Each conformer then goes through the following process to prepare for scoring:

Following that, each conformer was then scored using AutoDock Vina’s scoring function to score the resulting poses (Note I don’t actually use AutoDock to dock the compounds)*.

I’m not too interested in the numbers here because these scoring functions are not the reliable, but I am interested in the relative increases/decreases in predicted affinity compared to x0434. Below are the five best conformers for each position expanded (Note RDKit depicts the two meta substituents on the benzne as equivalent). For reference the predicted affinity for x0434 using this method is -5.30236 kcal / mol.

Finally, I combined a selection of these molecules and subjected them to the same protocol and scored them. Since I was combining 2/3 modifications, I repeated the protocol starting the final structures of both modifications and averaging the affinity.

I think the main caveat of this is that generally scoring functions are biased towards higher MW compounds and as such some interesting compounds with a lower MW may have got lost in the list.
Full list of docking results here: docking_results.csv (56.7 KB)

I will upload all of these structures and hope this post was (atleast) an interesting read. I think it’s something a bit different!

*So why did I not just dock using AutoDock?
I had originally planned to do this, however after testing by docking the diamond fragments, I found that binding poses were not being well reproduced. So I then scored the individual binding poses using just the scoring function with the fragment in their native protein crystal structure. I compared these results with the docking performed by John Chodera with a correlation coefficient of 0.459. This isnt exactly perfect but also not horrendous (the relative rankings of fragments gives 0.5). 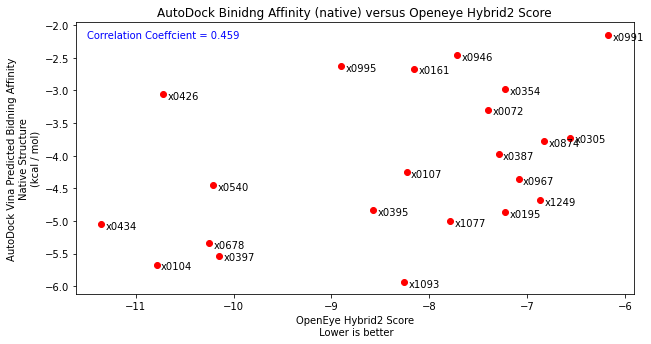 Following this, I tested the robustness of the scoring function by placing each fragment into the x0434 crystal structure (non-native structure). As expected, compared John’s docking and compared to the native structure results, there was no correlation highlighting the importance of having a native structure. 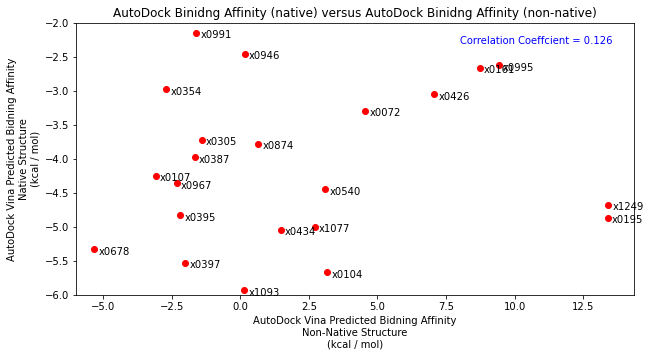 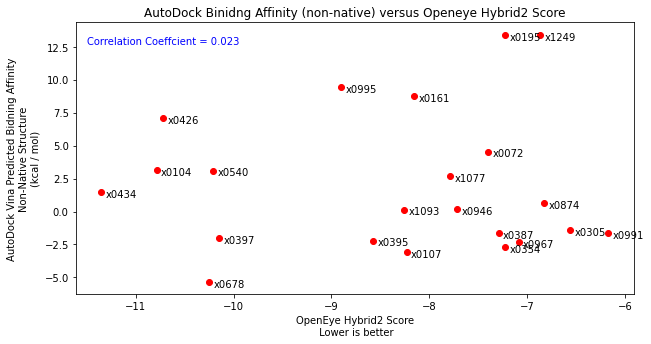 Finally, I then took each diamond fragment and subjected them to the protocol outlined above. Essentially placing the binding poses into the x0434 crystal structure and minimising the energy. Comparing the resulting structures by eye to their original crystal structure showed that the binding mode was well reproduced. Scoring these poses and comparing to the native structure also showed good agreement as well as improving the correlation with the Hybrid2 scores. 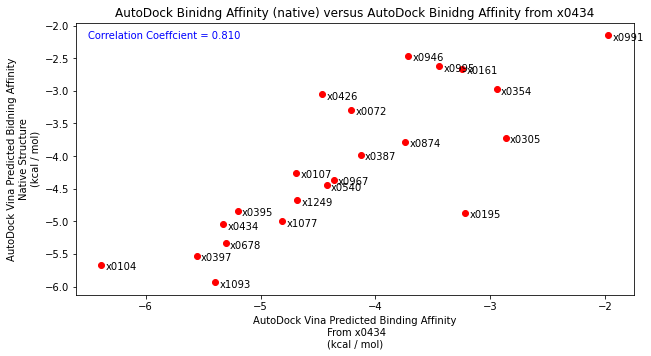 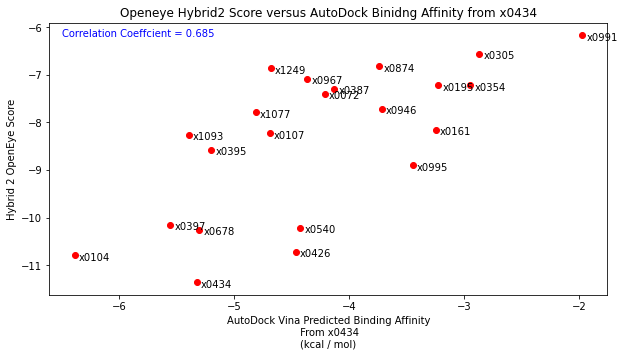 Anyway, if you’ve made it this far, thanks for reading! I would like to say thanks to everyone on the forum as well as a thanks to Pat Walters for his informative blog posts.

Thanks @WillPoole, really pleased to hear that the discussion here inspired some of this interesting work and was helpful.

Definitely an interesting read. If you share a sdf file with the files formatted as specified in Providing computed poses for others to look at I can make an interactive table as discussed in Temporary fix for visualisation (Michelanglo) for you.

Also it may be interesting to see how many of your compounds appear in the the x0343 expansion list from Compound sets to score for how well they can recapitulate fragment mergers.

[…] after testing by docking the diamond fragments, I found that binding poses were not being well reproduced.

You definitely spotted this correctly. Early on, Frank, the PI of the Diamond XChem group, was correctly trying to convince people to assess this —my covalent docking with Rosetta was basically never correct. I ended up writing an in-place non-docking algorithm of my own that keeps getting more and more complicated…

What tool did you use for your minimisation step? And did you constrain the x0434 atoms?

I think the main caveat of this is that generally scoring functions are biased towards higher MW compounds and as such some interesting compounds with a lower MW may have got lost in the list.

This is a good point. In another post here somewhere there is a discussion about ligand efficiency, which may be worth checking out.

Thanks for your feedback. I’ve since put everything together into two sdf files. The first makes reference to the minimised protein pdb file for each compound while the second just contains x0434_0 in the ref_pdb field.

Also it may be interesting to see how many of your compounds appear in the the x0343 expansion list from Compound sets to score for how well they can recapitulate fragment mergers.

On a quick inspection (by comparing SMILE strings) it turns out that only 55 of the docked compounds matches the london library and ive listed them here: comparison_to_london.csv (2.8 KB) . As I understand the london expansion list contains compounds which can by synthesised fairly easily in parallel, which may imply that my submissions may not be as easy to make or are just simply some new suggestions. Additionally, it seems that the London library contains mostly modifications to the benzene side of the urea group. I may infact have a go at downloading that library and subjecting to a similar protocol. I can see you’ve done that also using Fragmentstein.

What tool did you use for your minimisation step? And did you constrain the x0434 atoms?

OpenMM and I do not constrain the fragment core but i’m yet to find a structure which loses the core interactions with His163 and Glu166 so I think this is okay. 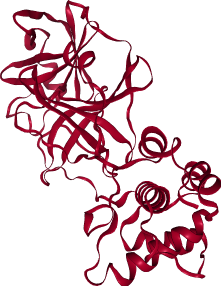 I assumed two things though:

Is the score still kcal/mol or did you change it to kJ/mol (or if you are American to foot-pounds-force per pound-mole)?

Awesome work @WillPoole!
What has kept striking me about enumerations such as these is that they generate a long list of things, but don’t help deciding which ones actually to buy. Which is why I keep leaning on the crutch of Magic Merges: do any of these expansions exploit other observed interations.
@Waztom - I think you need to hang your XCOS scores to the poses that @WillPoole posted, and then upload to Fragalysis (when it’s ready).

@matteoferla Thanks very much for this.

Indeed, with the ∆G the most negative is the best and is kcal/mol. The PDB positions should change slightly between each file since the is a local minimisation of the protein structure around each fragment. However, to be honest, these changes are pretty small that for the purpose of visualisation using the same one is definitely sufficient.

@frankvondelft Thanks for the positive feedback, i’m just happy to contribute!

Which is why I keep leaning on the crutch of Magic Merges: do any of these expansions exploit other observed interations.

I’m also a fan of trying to merge/link fragments together. It’s quite satisfying more than anything! I think in this regard the best ones I have are the mutations to the benzene ring para to the urea group (WP1078 & WP0529 in the screenshots in the post). These form interactions with the Glu-166 backbone carbonyl similar to Mpro-x0161, 0195, 0874, 0946, 1249 while maintaining all the standard x0434 interactions.

@WillPoole, thanks for explanation.
Could you (if you haven’t already) set up your designs and poses in the format that @reskyner in the main thread for this category: Instructions around the Docking Results category
More to the point: did you figure out a way to identify automatically those favourite ones you mention? Or could you just manually add a column to your SDF file, where you can annotate your favourites?
That way, others (and we!) can review your list in 3D and work out what we like.